Welcome to the 88th FOAMed Quiz. 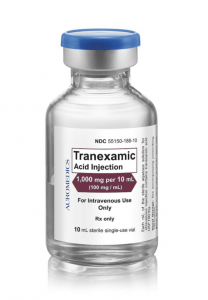 This recently published paper is about the efficacy of tranexamic acid (TXA) in the prehospital setting.

Injured patients, between 18 and 90 years old, transferred from scene or referring hospital to one of four level 1 trauma centers within 2 hours of injury and with at least one episode of hypotension (systolic blood pressure <90 mmHg) or one episode of tachycardia (heart rate >110 bpm), were included.

The primary outcome was 30-day mortality.

A: 30-day mortality was significantly higher in the placebo group

B: 30-day mortality was not significantly different between both groups

C: 30-day mortality was significantly higher in the TXA group

The STAAMP trial (Study of Tranexamic Acid During Air Medical and Ground Prehospital Transport) was covered on St. Emlyns and RebelEM this week.

Some limitations have to be taken into account. The trial was stopped early, was underpowered  and enrolled patients had an overall low injury severity (median ISS of 12).

Should we Rubber STAAMP Prehospital TXA?

You see a 30 year old male after a blow to the right eye. You suspect an orbital compartment syndrome (OCS) which warrants immediate treatment to present vision loss.
To prevent ischemia to the retinal and optic nerve you need to perform lateral canthotomy and inferior cantholysis (LCIC).

Which of the following statements is true about LCIC?

A: Globe rupture is the most common complication of LCIC

B: A Morgan Lens cannot be used as a shield to protect the globe

C: An intraocular pressure (IOP) greater than 30mmHg should be treated immediately

D: Delayed presentation is a contraindication for LCIC

A Morgan lens can be used to protect the globe but insertion can be challenging in patients with significant edema and ecchymosis.

An intraocular pressure (IOP) greater than 30mmHg should be treated immediately, but even without measurement of ocular pressure, clinical signs of orbital compartment syndrome warrant immediate treatment.

In 73% of the OCS cases patients returned to baseline vision after LCIC even after a delayed presentation beyond one hour after arrival.

Orbital Compartment Syndrome: Pearls and Pitfalls for the ED Physician

This recently published paper is about the accuracy of diagnostics in septic arthritis in the ED.

Septic arthritis can be difficult to differentiate from other causes of monoarticular arthritis. In this study the investigators aimed to assess the diagnostic accuracy of synovial lactate, white blood cell count (WBC), gram stain, PCR, and clinical evaluation.

What did the investigators find?

A: Synovial L-lactate is a good predictor for septic arthritis

B: PCR of the synovial fluid showed to be accurate for the diagnosis of septic arthritis

C: Synovial WBC and gram stain are the best predictors for septic arthritis

D: Combination of history and physical exam showed to be a good predictor for septic arthritis

The correct answer is C.

This week Clay Smith covered this paper about diagnosis of septic arthritis.

Keep in mind this is a very small single centre study. 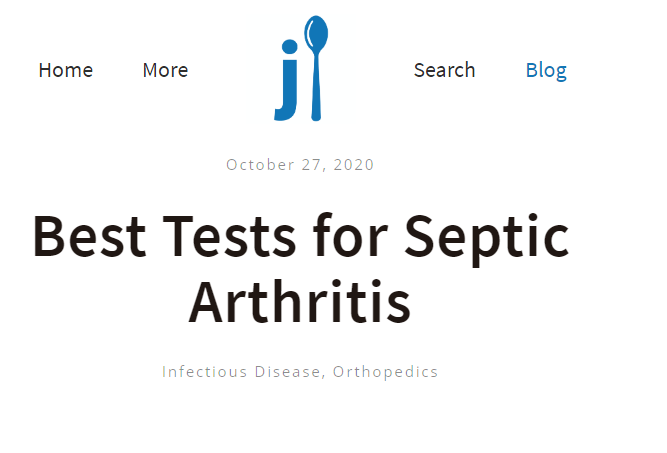 This recently published paper is about the validity of two-dimensional carotid ultrasound to detect the presence and absence of a pulse.

A: 2D ultrasound of the common carotid artery is both sensitive and specific for detection of the presence or absence of a pulse

B: 2D ultrasound of the common carotid artery is sensitive but not specific for detection of the presence or absence of a pulse

C: 2D ultrasound of the common carotid artery is specific but not sensitive for detection of the presence or absence of a pulse

D: 2D ultrasound of the common carotid artery is neither sensitive nor specific for detection of the presence or absence of a pulse

The concept of carotid ultrasonography instead of a manual pulse check sure is interesting. In theory, it should be a lot more sensitive compared to manual pulse checks, especially in low output states. This paper showed a sensitivity of detection of a pulse was 91%.

However, given the methodology of the paper this does not mean we can apply this technique in the ED yet as the patients included were undergoing routine bypass surgery, so this study was not performed in the ED. Furthermore, the ultrasound images were obtained without CPR in progress, by two experienced sonographers.

JC: Finger on the Pulse?

Intoxications with calcium channel blockers (CCB), such as verapamil and diltiazem, are potentially very dangerous. Even a single pill can cause severe toxicity in children and pills with sustained release products can have delayed onset and prolonged toxicity.

Which of the following statements about the treatment of CCB overdose in children is true?

A: Asymptomatic patients need observation for a minimum of 6 hours

B: Activated charcoal is only indicated if ingestion was within an hour of presentation

C: Treatment of CCB intoxication with calcium is supported by plenty of evidence

Although development of symptoms in asymptomatic patients later than 6 hours after ingestion is rare, consensus is to monitor for at least 24 hours.

Activated charcoal (0.5-1 g/kg) is typically used if ingestion was within the last 60 minutes but benefits may still be seen if ingestion is of large quantities of sustained-release products even after 1 hour.

It seems intuitive to give calcium in case of a CCB overdose. However, as with almost every treatment in toxicology, supporting evidence is scarce. 10% calcium calciumgluconate (60 mg/kg) is prefered over 10% calciumchloride (20 mg/kg) since this is better tolerated in peripheral veins.

Finally, CCB overdose causes a hypoinsulinemic state which could cause hyperglycemia and decreased glucose uptake by myocardial and end organ tissues. High-dose insuline (1IE/kg) followed by infusion of 1IE/kg/hr) is considered first-line therapy in patients with signs of myocardial dysfunction in order increase inotropy and overcome hypoinsulinemia and insulin resistance.

This quiz was written by Eefje Verschuuren, Nicole van Groningen and Joep Hermans