Welcome to the 73th FOAMed Quiz.

This week the most widely discussed Randomized Controlled Trial (RCT) is about the use of dexamethasone in patients with COVID-19.

Hospitalized patients with clinically suspected or laboratory confirmed COVID-19 received either usual care or usual care plus dexamethasone 6 mg daily (either orally or intravenously) for up to 10 days, or until discharge. The primary outcome was all cause mortality at 28 days.

A: All cause mortality at 28 days was higher in the dexamethasone group compared to the usual care group

B: All cause mortality at 28 days was not different between the groups

C: All cause mortality at 28 days was lower in the dexamethasone group compared to the usual care group

First10EM covered the pre-publication of The RECOVERY trial along with others like Emcrit,  REBEL EM, FOAMcast  and Broom Docs.

This pragmatic, open-label, multi-centre RCT from 176 hospitals in the United Kingdom, randomized 2104 patients to the dexamethasone group and 4321 to the usual care group.

All cause mortality at 28-days was lower in the dexamethasone group compared to the usual care group (21.6% vs 24.6%; OR 0.83; 95% CI 0.74-0.92, P<0.01). The biggest benefit was among the sickest patients who needed oxygen and appeared to occur later in the disease course. Dexamethasone thereby reduced the duration of hospitalization.

These results seem very promising. Keep in mind that there is a possibility of selection bias and a lack of blinding. Furthermore this article hasn’t been peer reviewed yet.

Dexamethasone for COVID: The RECOVERY trial

The second widely discussed RCT this week is not about COVID-19. The HALT-IT trial is about Tranexamic Acid (TXA) versus Placebo in patients with acute gastrointestinal bleeding. The primary outcome was death due to bleeding at 5 days. Close to 6000 patients were randomised to both groups (12000 is total).

A: There was lower death due to bleeding at 5 days and lower all cause mortality at 28 days in the TXA group compared to the control group

B: There was no difference in death due to bleeding at 5 days and all cause mortality at 28 days between both groups

C: There was lower death due to bleeding at 5 days in the TXA group compared to the control group, but all cause mortality at 28 days was equal

D: There was lower all cause mortality at 28 days in the TXA group compared to the control group, but death due to bleeding at 5 days was equal

The HALT-IT trial was discussed on StEmlyns, First10EM  and the Resus Room podcast this week.

Keep in mind the subjects were not very sick on average and the time from symptom onset to inclusion was very long (22 hours on average). Both can impact the efficacy of TXA in gastrointestinal bleeds.

JC: Halt! It’s not time for TXA! Or is it? HALT-IT results at St Emlyn’s

The Aortic Dissection Detection Risk Score (ADD-RS) is a useful tool for aortic dissection. Does adding a d-dimer with a cutoff of 500 ng/dL alter the diagnostic accuracy of this tool even further?

A: Adding a d-dimer to the ADD-RS increases sensitivity without decreasing specificity

B: Adding a d-dimer to the ADD-RS increases sensitivity, but decreases specificity

C: Adding a d-dimer to the ADD-RS does does alter its diagnostic accuracy

An ADD-RS with a cutoff of ≥ 1 was found to have a sensitivity of 94% on its own. Adding a d-dimer increases the sensitivity to 1 at the cost of lowering the specificity to 15%. 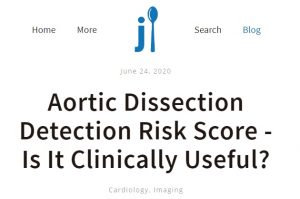 Your 53 year old patient presents to your ED with a backache and fever. Even though there are no neurological deficits found on physical exam you suspect her of having an spinal epidural abscess. The patient reports having recovered from a skin infection recently.

Which of the following statements is true about spinal epidural abscesses (SEA)?

A: Neurological symptoms are found in most of the patients

B: CT with contrast is equally accurate in diagnosing SEA compared to MRI

D: The most common causative organism of SAE is E. coli

Neurological symptoms are found in only 33 percent of patients with SEA. Gadolinium enhanced MRI is considered gold standard for diagnosis with a sensitivity of over 90 percent. The most common causative organism is Staphylococcus aureus.

Recent Soft Tissue Infection with bacteremia is associated with pyogenic spinal infection (OR 13.5).

A 30 year old female presents to the Emergency Department. She tells you that she took a substantial amount of aspirin about 5 hours ago because she wanted to end her life after a fight with her two best friends. Her complaints include a ringing sensation in her ears and mild nausea. She is tachycardic and tachypneic but appears well and non-toxic.

What will her arterial blood gas most likely look like?

A: A mixed respiratory alkalosis / metabolic acidosis with an elevated anion gap

B: A mixed respiratory acidosis / metabolic alkalosis with an elevated  anion gap

Salicylate overdose was covered on emDocs this week.

Aspirin has a high overdose potential since it can be bought over the counter in different formulations. An overdose leads to activation of the medulla in the early stages, leading to hyperventilation causing a respiratory alkalosis.

Finally, an increased anion gap can be found due to increased fatty acid metabolism leading to an increase in ketone bodies.

This quiz was written by Eefje Verschuuren, Nicole van Groningen and Joep Hermans