Welcome to the 68th FOAMed Quiz.

Your 45 year old patient is presented in cardiac arrest after an electrical injury on a construction site. Co-workers stated he passed out after a spark came from the fuse box of a residential building he was working on. This patient therefore most likely suffered an Alternating Current (AC) injury. A Direct Current (DC) injury is unlikely.

Which of the following statements about this case is true?

A: This type of electrical injury causes rhythmic muscle contractions and can induce tetany

B: The electrical injury most likely caused asystole immediately, ventricular fibrillation is unlikely

C: This electrical injury is most likely considered high voltage

D: This type of electrical injury tends to throw a victim with significant force

This patient suffered Alternating Current (AC) injury and the direction of flow of electrons alternates on a cyclical basis, like a metronome. The electricity we use in our houses is AC. Direct Current (DC) is found in circuits using batteries, railway tracts and lightning.

AC causes muscle contractions and is far more likely to cause ventricular arrhythmias than DC does. DC is more likely to ‘’throw’’ a patient. High voltage injury is considering electrical injury > 1000 Volts. These voltages are not typically found in our house.

A 3-year old boy is brought into the emergency department by EMS after being found unconscious during a house fire. Besides carbon monoxide poisoning, you guess the risk of cyanide poisoning is high.

Which of the following statements about the treatment of cyanide poisoning is true?

A: Sodium Thiosulfate helps to convert cyanide to thiocyanate, which is another harmful compound but readily metabolized in the liver

B: The preferred administration route of amyl nitrite is intravenously

Cyanide poisoning was covered by Elise Alves Graber from emDocs this week as part of the ToxCards series.

Toxicity is mainly due to inhibition of cytochrome oxidase in the electron transport which halts ATP production leading to acidosis and anaerobic metabolism despite an often oxygen rich environment.

Sodium Thiosulfate helps to convert cyanide to thiocyanate, which is a harmless compound eliminated in the urine.

Amyl nitrite is no longer used due to unpredictable effectiveness. It is highly volatile and used to be administered by inhalation.

Sodium nitrite causes methemoglobinemia. This helps because cyanide has a higher affinity for the ferric iron in methemoglobin than for cytochrome oxidase.

A 30 year old woman presents to your emergency department with ongoing seizures.

Which of the following non-intravenous options has the shortest duration from administration to seizure cessation according to this recently published paper?

Justin Morgenstern discussed this paper on First 10 EM this week.

The authors of this systematic review analysed data about different routes and medications for terminating status epilepticus. 20 RCT’s were included, of which most were unblinded and of low methodological quality.

Intramuscular midazolam was the fastest to terminate seizures (2.1 minutes), followed by intranasal midazolam (2.4 minutes). Rectal diazepam and buccal midazolam both needed around 4 minutes.

Is there any reason to use intranasal midazolam for seizures?

A 40 year old man comes in with altered mental status, agitation, tachypnoea, tachycardia, hypertension, diffuse (lead-pipe) tremors and hyperthermia. His neighbor found him confused and states the patient uses drugs from his psychiatrist. Which of the following clinical findings may point you in the direction of Serotonin Syndrome (SS) and does not so much fit Malignant Neuroleptic Syndrome?

The difference between SS and NMS is quite tricky sometimes. Especially when the causative agent is not known. Differences in clinical findings are often very subtle. Hypertension, Hyperthermia, Tachypnoea, Tachycardia and Altered mental status can fit both etiologies. However, tremor and increased muscle tone are more typically seen in SS, while diffuse rigidity is more typical for NMS. Furthermore, the onset of SS is a lot faster compared to the more gradual onset of NMS. 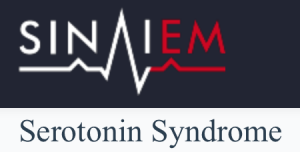 A 13 year old boy presents to your emergency department with severe pain in his right ankle caused by an uncomfortable landing during a basketball game. The X-ray of his ankle shows a triplane ankle fracture.

Which of the following statements is true about triplane ankle fractures?

A: They mostly occur shortly after closure of the distal tibial physis

B: Since triplane ankle fractures are caused by rotational forces, proximal spiral fibula fractures and base of the 5th metatarsal fractures are relatively common concomitant fractures

D: The Arcuate sign on CT is typical for this type of fracture

Triplane fractures may be classified as 2 part, 3 part or 4 part fractures and additional CT imaging is often necessary to evaluate the amount of dislocation of the different fracture parts. The typical sign which can be seen on CT is the Mercedes sign (see picture above).

The Arcuate sign refers to an avulsion fracture of the head of the fibula at the insertion site of the arcuate ligament complex.

This quiz was written by Eefje Verschuuren and Joep Hermans